To me, the sixth-generation iPod Nano was a new product rather than a continuation of the iPod Nano lineup. I see the Nano 6th generation as a grown-up and more mature iPod Shuffle. When I started using the iPod Nano 6th gen, I felt I wasn’t using an iPod. For the longest time, I associated iPods with either a click-wheel or multi-touch interface as seen on the iPod Touch. The sixth-generation iPod Nano does not look like any iPod I have in my collection. It’s less than half the size of the iPod Nano 5th gen, measuring 40.9 x 8.8 x 37.5mm and weighing a mere 21 grams. The click-wheel was replaced by a tiny 1.5-inch touchscreen. 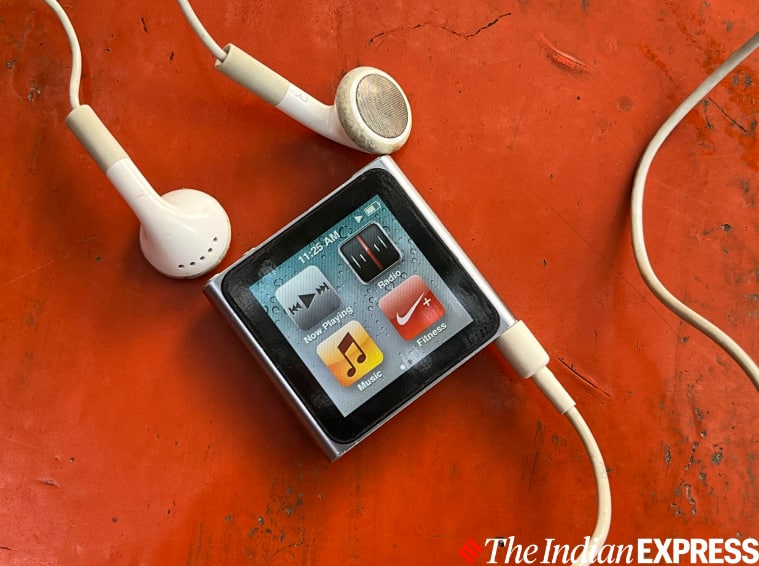 Cased in aluminium and a large clip, it’s closer to the iPod Shuffle. I can easily clip the iPod onto my shirt or keep it inside my pocket and you won’t know if it is there. I always wanted a device that’s small, stylish and convenient whenever I step out of home and go on a walk. You will find three physical buttons on top, a headphone jack and the 30-pin connector for USB computer sync and charging port, on the bottom. The larger Sleep/Wake button turns the screen on and off, but there is no home button as you found on the iPhone. There are no buttons to play-pause tracks; instead, you have to activate the screen (more on that later) if you want to control playback or change tracks.

The iPod with a difference

I am a big fan of the click-wheel-based interface and wish Apple hadn’t stopped manufacturing the iPod Classic. With the sixth-generation iPod Nano, Apple switched over to a touchscreen and I kind of liked the approach. Coming from the iPhone and iPad, I was pretty comfortable using the Nano’s interface in 2022. Even though the screen is pretty small and the display lacks multi-touch gestures (there’s only one two-finger gesture on the device), navigating the interface feels intuitive like with all Apple products. 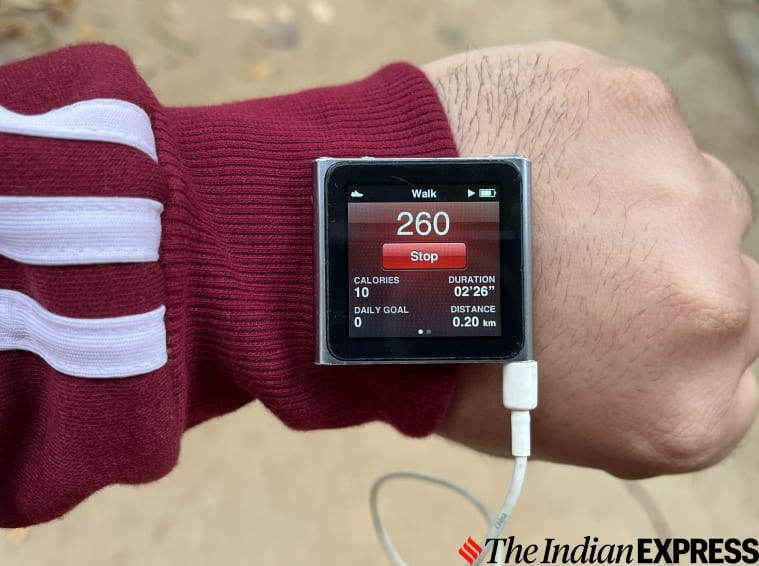 Not only do I use the iPod Nano 6th gen for listening to music but also use it for tracking steps. (Image credit: Anuj Bhatia/Indian Express)

When you power the device, you will notice that the screen can hold four rounded-corner icons and there are four screens that you can swipe through with your finger. Because there is no home button, you can either swipe right, or you can tap and hold it in the center of the screen to go back to the home screen. Yes, I do feel that without the click-wheel finding the music requires more touches and presses but the interface never feels awkward to navigate. The iOS-style interface feels practical for a device like the Nano, although it does not offer many features (Sorry, no app support here). I can easily move icons around, edit existing playlists and create new ones, and the touchscreen interface enables you to rotate the screen as per your liking.

Use it as a watch

I don’t know if you remember when the iPod Nano 6th generation hit the market, accessory makers started selling watch bands that turn the tiny music player into a wristwatch. In fact, a whole new market for iPod Nano watchbands started to flourish way back in 2011. On paper, the concept of the iPod Nano watch intrigued me and I thought of buying a compatible wristband online. The nano slips easily into the band and provides full access to all buttons as well as the nano’s headphone jack. I eagerly tried for a week, mostly during a morning walk, and the iPod Nano watch sticks on my wrist. I like the vibe and simplicity of the iPod Nano watch.’

In an age where every gadget is internet-connected, the iPod Nano watch works just fine without a companion phone. No Bluetooth connection, the absent Apple Music app, nonsensical WhatsApp messages buzzing at 5am, I started appreciating the iPod Nano watch more. I’m still in awe of the 18 watch faces that come with it including Mickey Mouse. But the real reason I thought why the iPod Nano watch makes sense is the fact that I could use the device as a fitness tracker. The Nike+ fitness does not offer advanced fitness tracking but it covers the basics such as steps count, distance travelled and custom calorie count and that works for me. 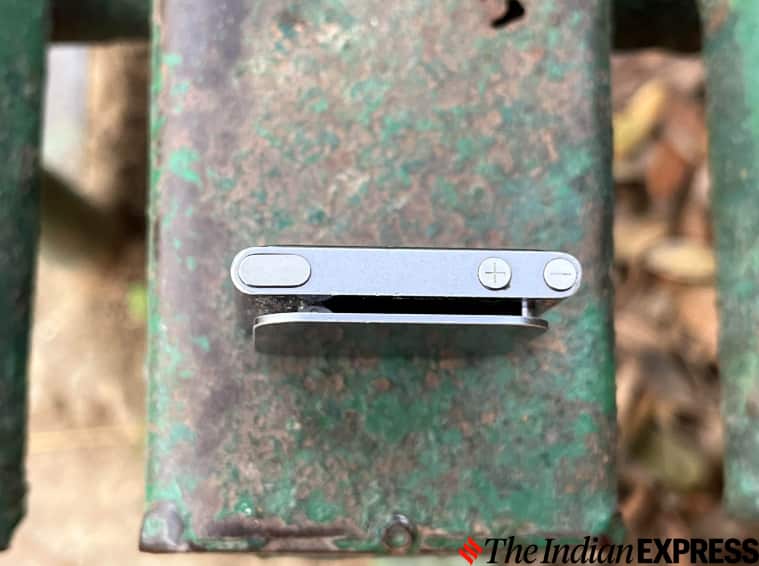 Of course, it would be foolish to compare the iPod Nano watch with the Apple Watch. You need to remember that the sixth-generation Nano came out in 2010, four years before Apple debuted the Apple Watch. Although Cupertino never pitched the Nano as a digital watch, I could see the shades of the Apple Watch in the digital music player. The sixth-generation iPod Nano was, in retrospect, the first sign that Apple wanted to make a smartwatch. Instead of rushing and launching a half-baked product as everyone did at that time, Apple started adding digital watch faces as well as health and fitness features into an iPod already familiar to consumers. 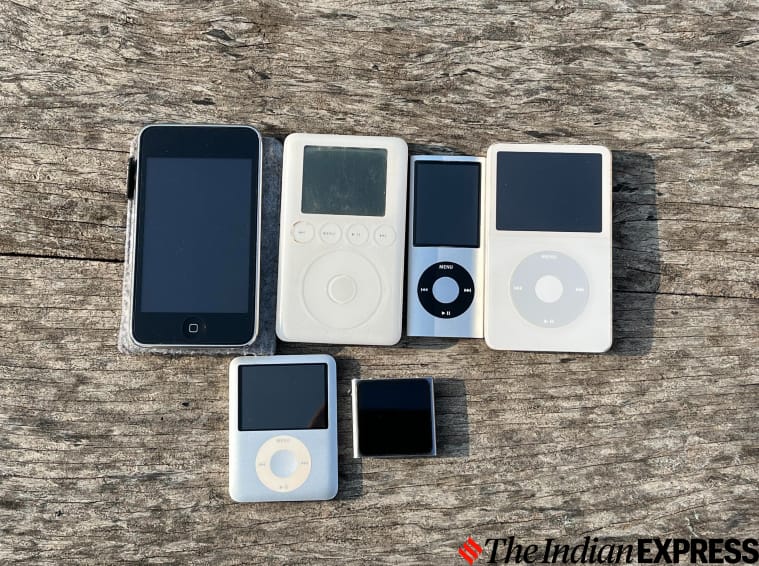 I have been collecting iPods for years. (Image credit: Anuj Bhatia/Indian Express)

I recently reviewed the reimagined Nokia 6310. I started using the sixth-generation iPod Nano for the same reason. I carry a Nokia 6310 and iPod Nano when I step out for my morning walk, leaving my iPhone 13 mini behind at home. I want to simplify my life, whether staying away from social media or cutting the noise of smartphone notifications. The sixth-generation iPod feels a lot like my morning companion — a little, compact device that not only plays music (the sound quality is terrific as expected) but also tells me the time and counts my steps. I would have brought my iPod Touch for my daily morning walk, but I chose the iPod Nano 6th gen because I wanted an iPod that would be invisible in my pocket. The size and a built-in clip, and the fact that the iPod Nano 6th gen does not have Wi-Fi, apps support or video play option, is exactly what I was looking for. I am not telling you to give up on the iPhone or Apple Watch. The whole idea of using the iPod Nano 6th gen was to purely focus on listening to music and enjoying the moment. I am not interested in staring at a screen on my phone early in the morning, I don’t need to know what’s happening in other people’s life…who went to the Maldives, who wore what last night or what happened in the last episode of Shark Tank. Admittedly, that was a problem I was not addressing for long.

With Product You Purchase 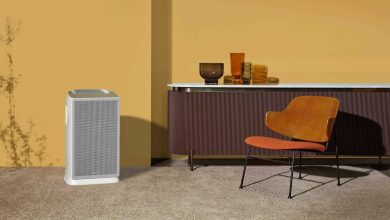 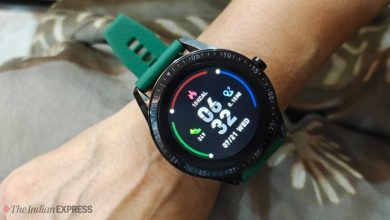 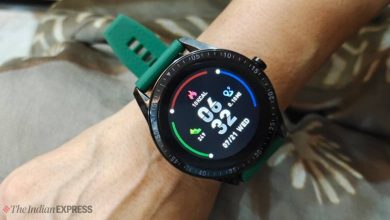 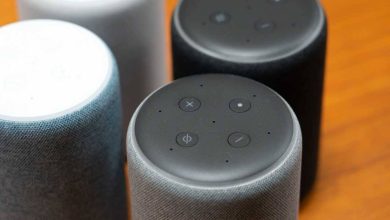